Although this is the 3rd episode in the Federation Files, it is actually the prequel to episode #1, “His Name is Mudd”.   This vignette introduces then Commander McCann who, we discover is on a secret undercover mission infiltrating behind enemy lines trying to gather Romulan secrets for the Federation.  This episode also introduces the USS Nikita, Captain Randal, crew and the special Maco team sent out on a rescue mission to find and recover Commander McCann. 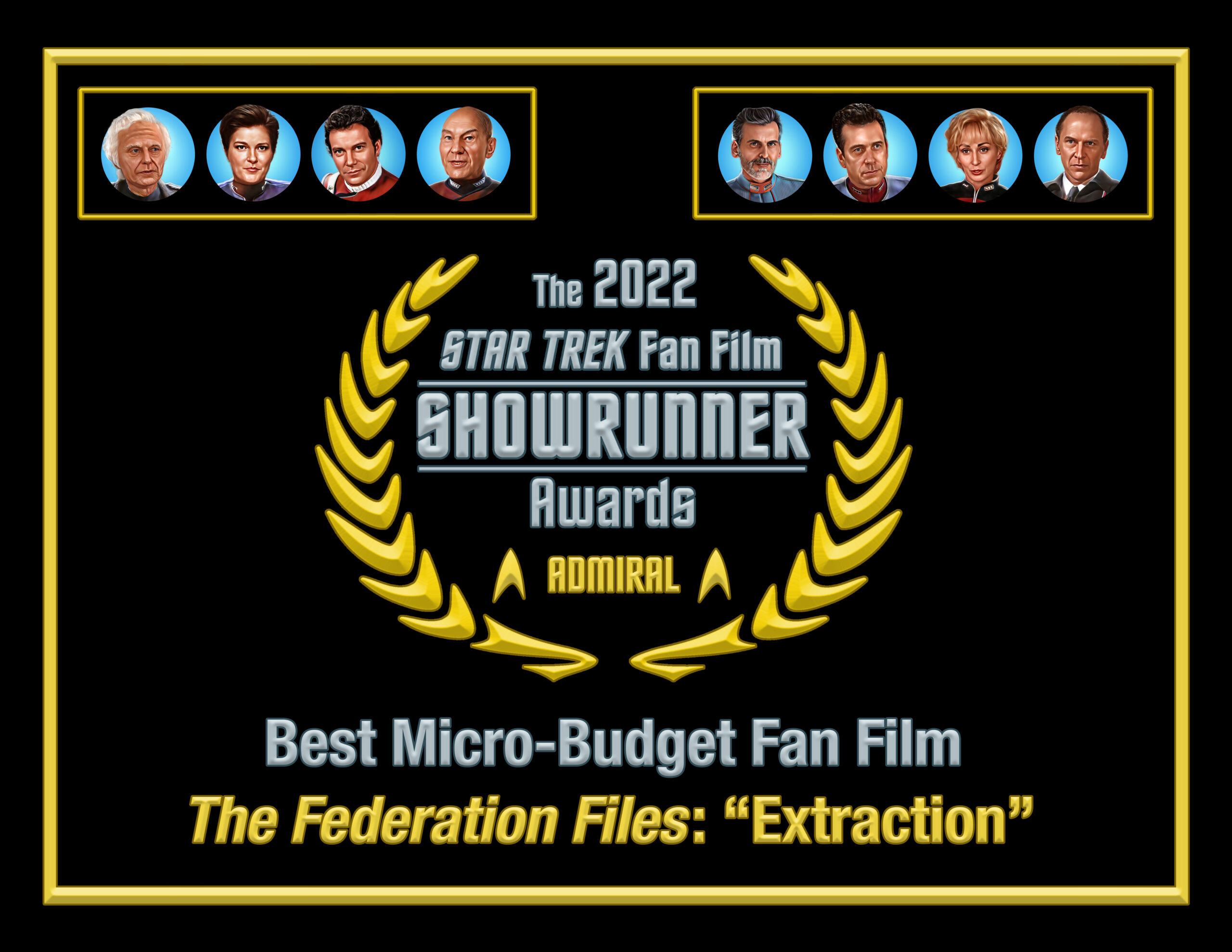 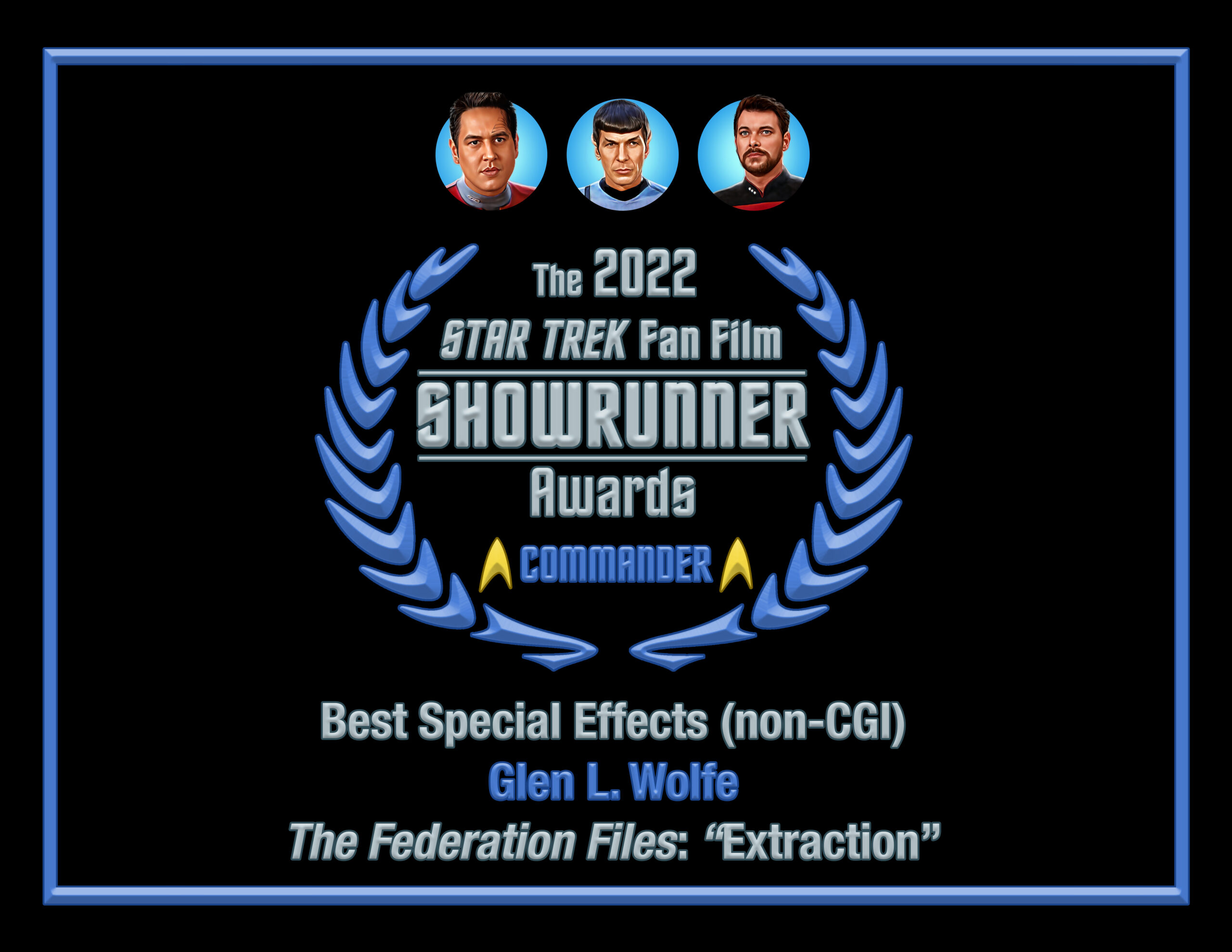 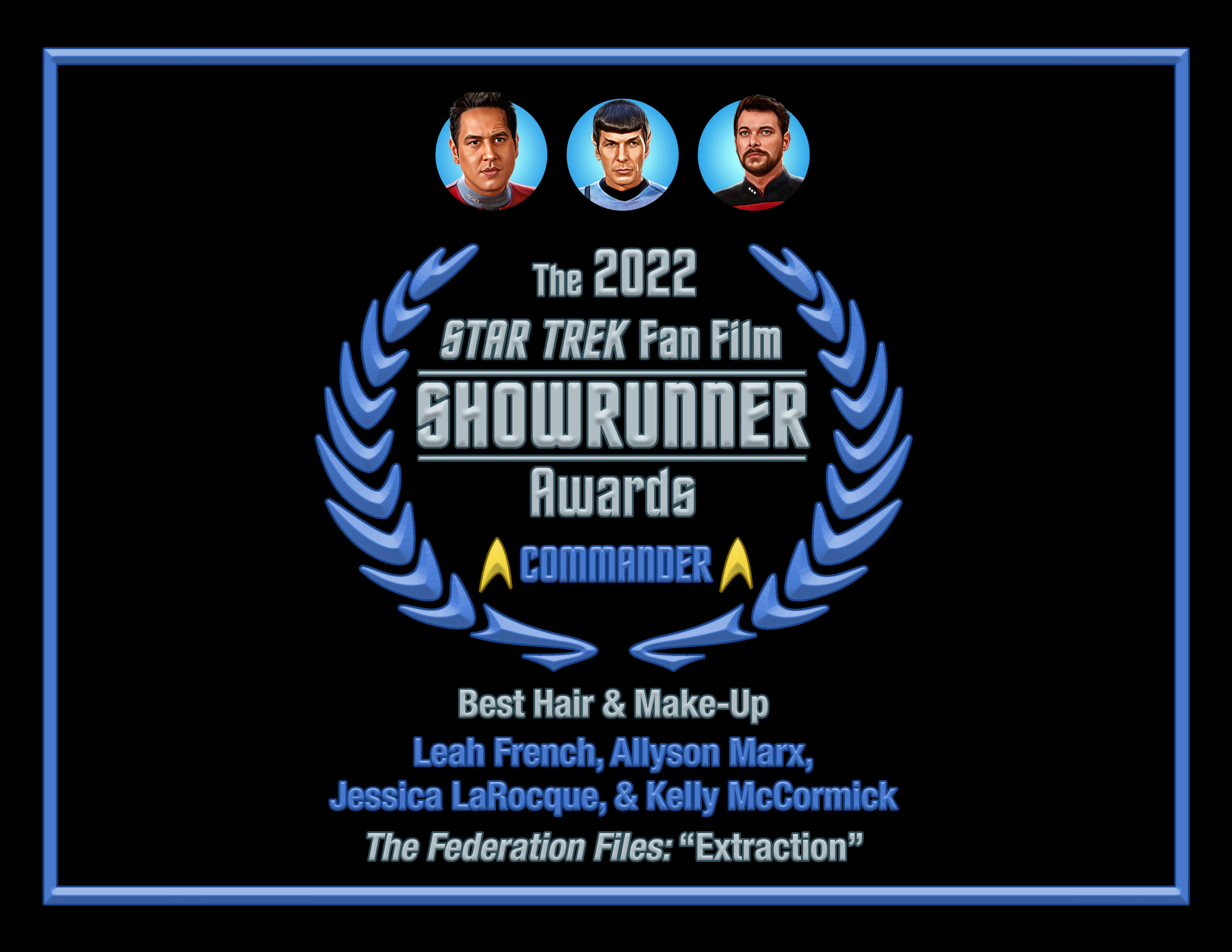 A Star Trek fan production based on the original series episode, Mudd’s Women which aired 50 years ago, October 13, 1966. In this episode, The Federation Files, “My Name is Mudd”, Harcort “Harry” Fenton Mudd joins the star ship U.S.S. Constitution and its crew with Captain Charles McCain. In typical Mudd fashion, nothing goes smoothly on this mission to rescue Mudd’s son and friend who have been hijacked by a race who are not in the current Starfleet data base.

Episode #2 of The Federation Files, “Walking Bear, Running Wolf”. A Star Trek fan production based on the original series timeline. Lieutenant Dawson Walking Bear, who was first featured in Star Trek, The Animated Series, is featured in this episode where he begins to see visions of a wolf roaming the USS Enterprise corridors. Dr. McCoy has no explanation medically for Walking Bear’s hallucinations but says there may be a correlation between his and his mother’s 30th birthday who was lost on a deep space scouting mission. The suspense heightens when Walking Bear is confronted by the unexplained on his next away mission. Another ‘come to life’ character from the animated series, the cat-like alien, M’Ress.

The USS Lexington is on a mapping mission just outside the Galactic Rim when they discover a floating, unidentifiable metallic object of unknown origin. Beaming it aboard disables power to the ships engines and the crew tries frantically to get the engines operational before they drift into the rim. A science team is trying to learn more about the ‘Droid’, it’s origin and any data it may hold. The clock is ticking for the Lexington as it drifts dangerously close to the Galactic Rim. Will they survive in time and will this unknown ‘droid’ play an important part in their ultimate fate?

Data must correct the timeline before the Federation is lost and the Borg take over. This story features The Guardian of Forever that was originally introduced in Season one of Star Trek, “City on the Edge of Forever” and will surely be a favorite watch for time-travel buffs. This film crosses many Star Trek franchises including the original series, the Next Generation and Voyager. The story was originally written by Camren T. Burton for a proposed Star Trek television pilot series starring John Savage as captain Rudy Ransom, who appeared in the Star Trek Voyager episode, “Equinox”. This new series was to also include Gary Lockwood from the original Star Trek second pilot, “Where No Man Has Gone Before”. The pilot failed but the shelved-footage caught the attention of Glen L. Wolfe who acquired the rights and re-wrote the story that is featured in this final production. For those Star Trek fans who love hidden Easter Eggs, play close attention and you’ll discover them throughout the film. Including some screen time from one animated Star Trek character.

How do we really know if we are living an unaltered timeline? What are the affects if a time traveler changes or alters that timeline? Nothing, unless you own S.T.A.R. Private Investigations and you believe the government is covering up tons of information about UFO’s, alien abductions, close encounters and a host of other taboo conspiracies. Allen Brown and Karen Oakley stumbled onto some recent de-classified government information that could potentially expose a cover-up proving that the US government is concealing evidence of an intelligent race of beings who have traveled through time visited earth. For what reason? Brown and Oakley are determined to find out. In this Star Trek episode, from The Federation Files, we feature many Star Trek episodes that have use d time travel as the theme of their story. Voices From The Past takes a look at many of those time-traveling story elements, craftily weaving them into this episode and asking what would happen if an investigative team came close to finding out the truth. This is a fun episode filled with many Easter Eggs. See how many you can spot from Star Trek, The Original Series, Deep Space Nine, The Next Generation and Enterprise.

Episode 6 of The Federation Files, “The Green Manifesto” explores Colonel Phillip Green from the original series Star Trek episode, “The Savage Curtain”. “The Green Manifesto” is a vignette prequal probing the problem of a worldwide virus, its effects and how one person could potentially have ultimate control over the entire population of the world.

FRIENDS AND FOES
During the formative years of the Federation, potential members  debate the benefits of joining a galactic alliance. Find out how a marooned Starfleet officer’s plight changed the direction of one race’s future with the United Federation of Planets in the Federation Files, “Friends and Foes”.

While on an adventure after trespassing onto a Native American reservation, Gina and Kelvin discover a cave and decide to steal a small mummy and death mask they found. Little do they know, their every move is being watched. Their curiosity gets the best of them and the more they discover about the artifact, the deeper in trouble they go. Brown and Oakley from S.T.A.R. Investigations, (stars of a previous episode – Voices From The Past https://youtu.be/-aE8I7Rf9qI), team up with the kids to help them out of their sticky situation and help the kids get the Mask back to its rightful owners. 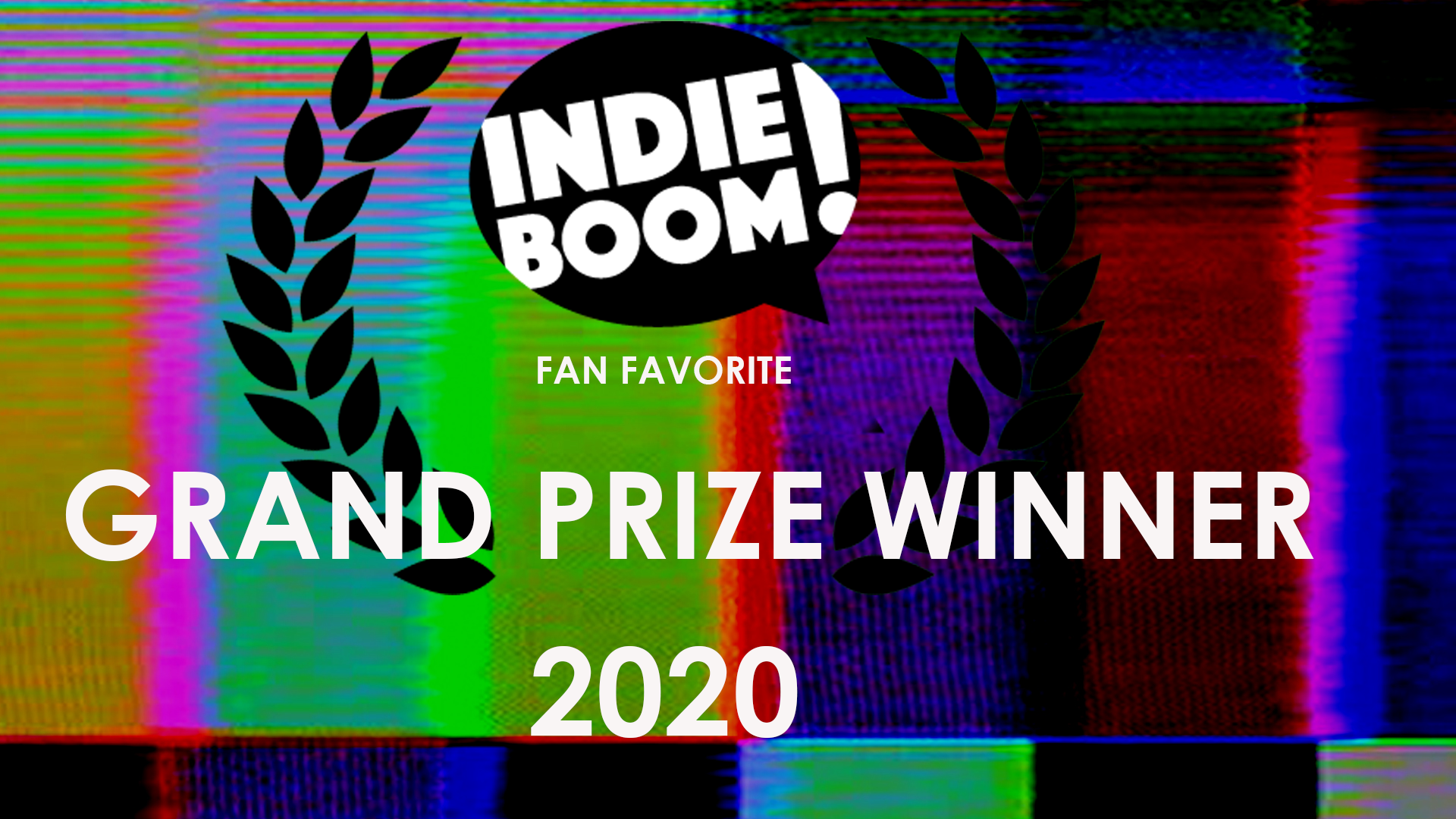 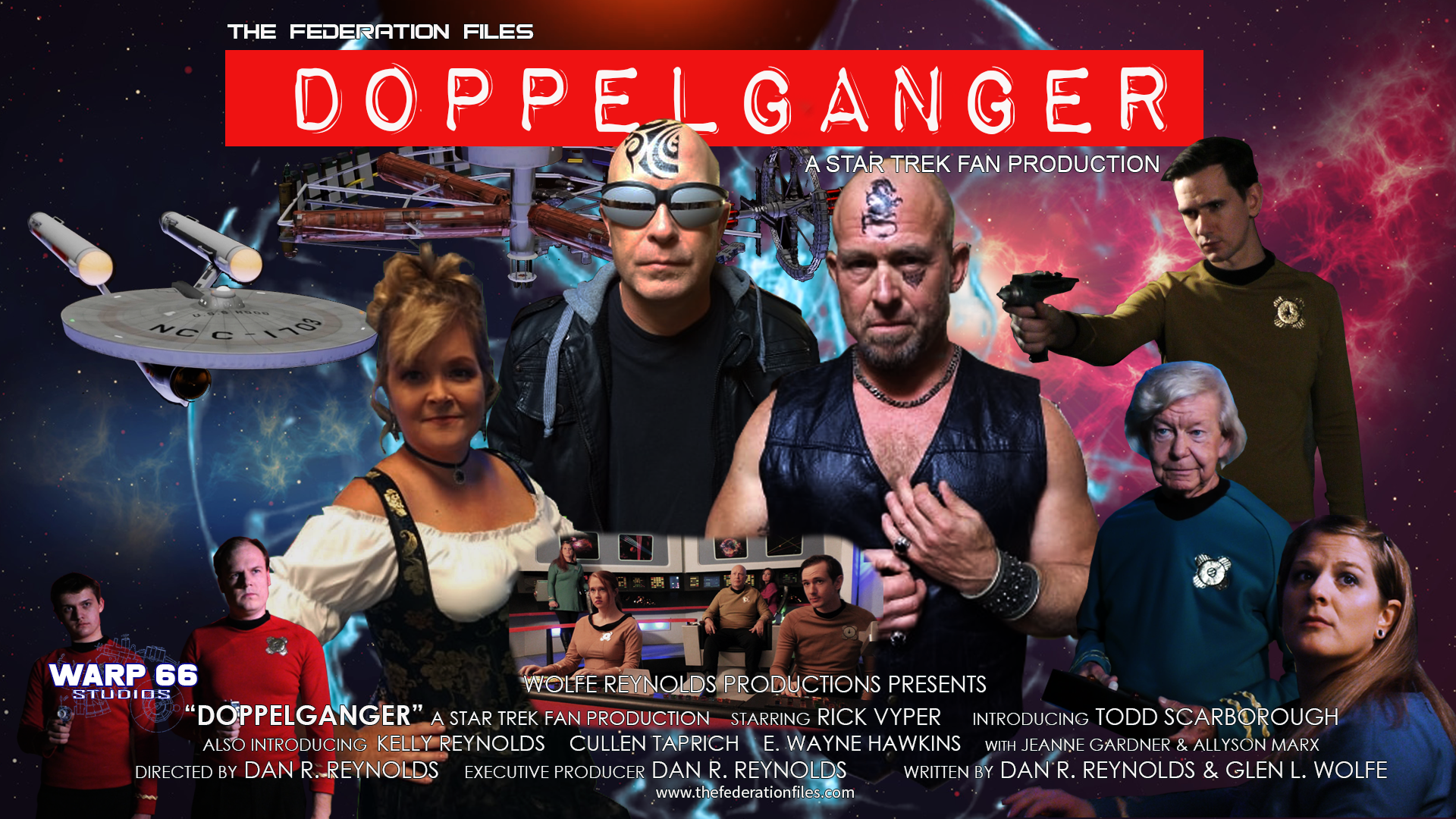 Transporter consoles are being tampered with at many locations throughout Federation space and Captain Clinton Dodge and the crew of the USS Hood are ordered to track down who is responsible for committing these crimes. The trail ends at the Shire, an outpost in space in the remote Andor sector. There, they meet and join forces with the local law, Sheriff Qwee. This is a first look at The Federation Files crew of the USS Hood. Can Captain Dodge apprehend those responsible or will the renegades slip through and escape Federation law? What are the moral implications of the crime committed and what happens when you come face to face with a Doppelganger? 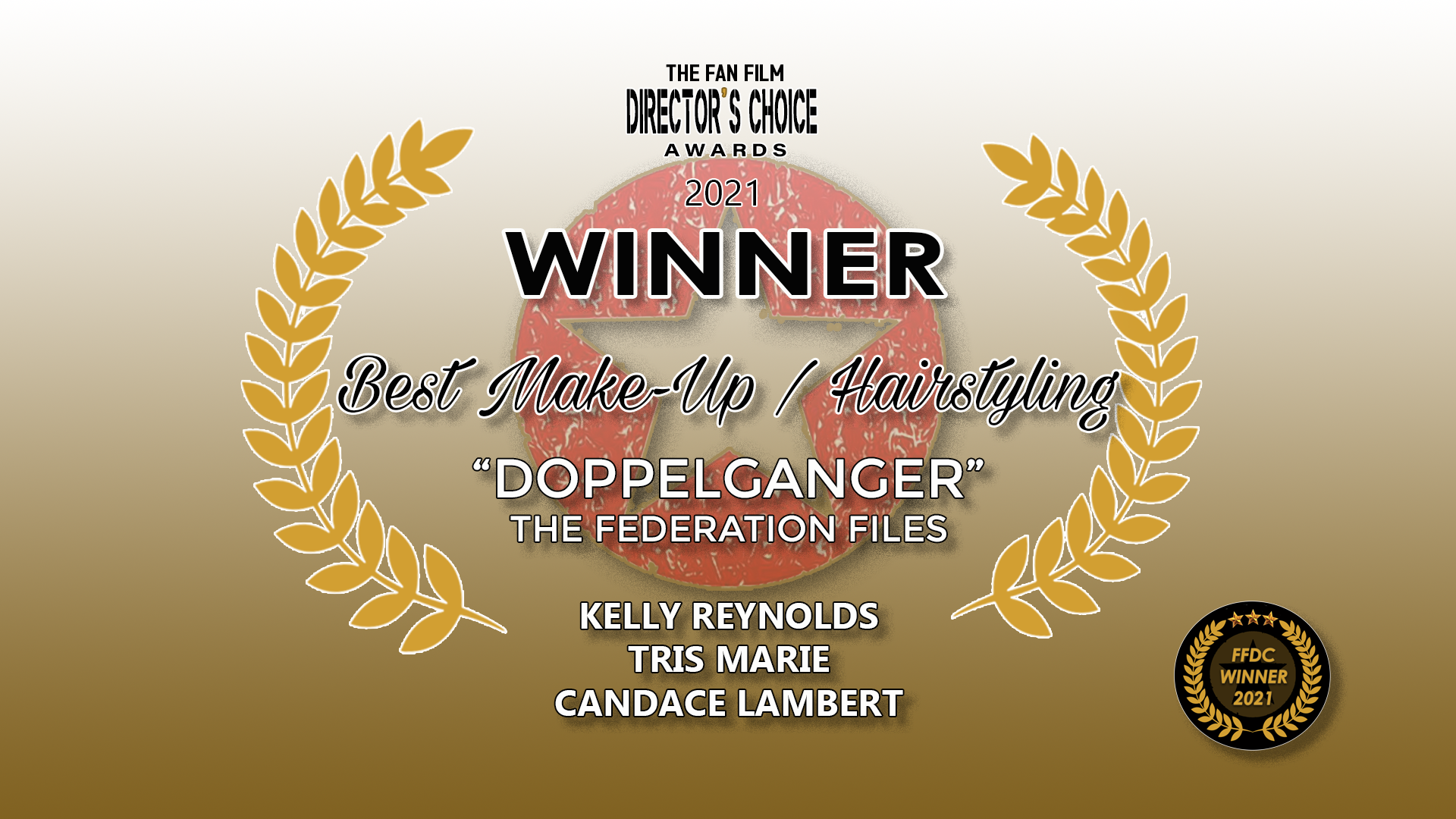 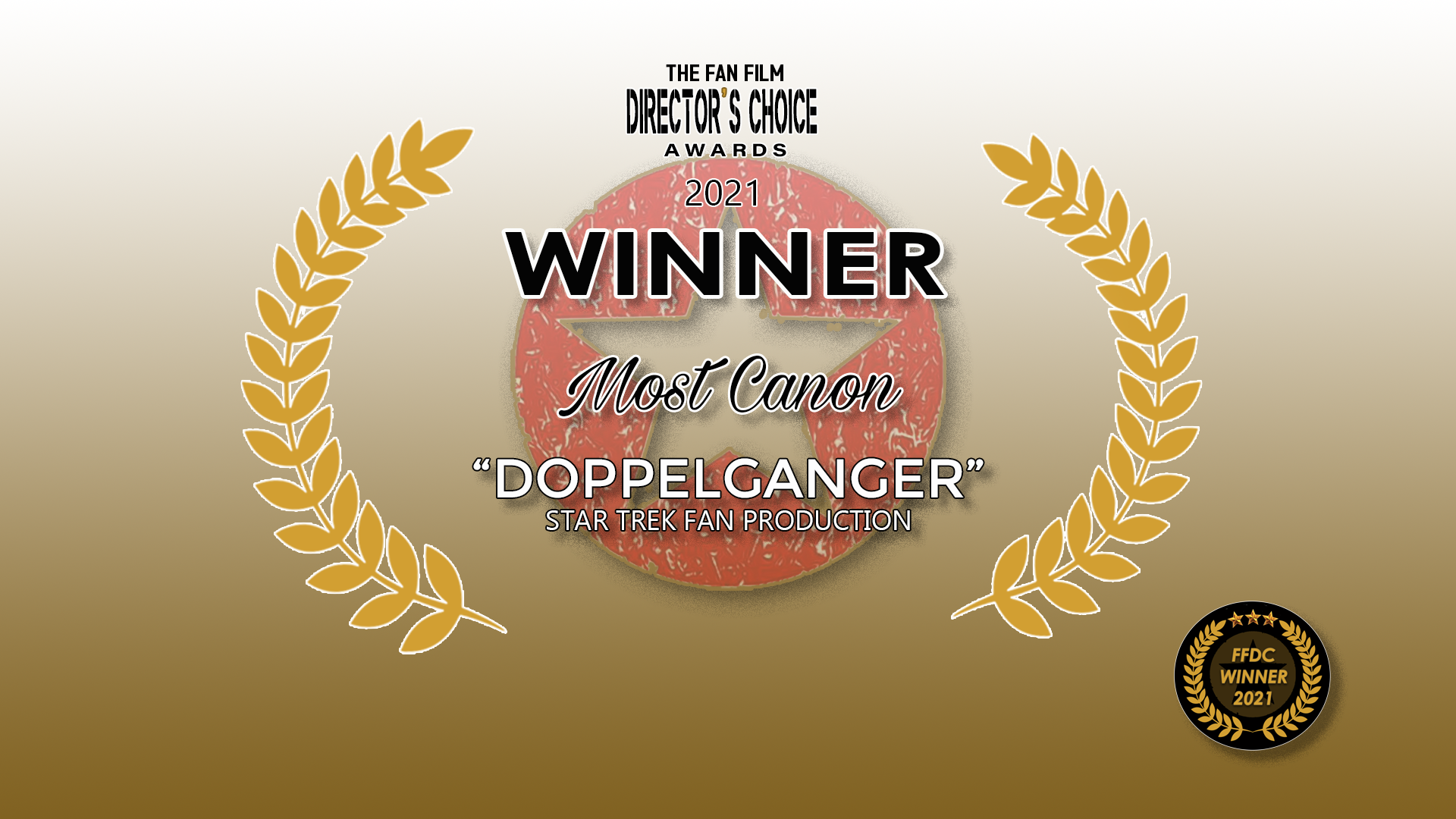 A DY 100 Class “sleeper-ship” covertly launches from earth and a secret Vulcan research and monitoring facility, on the dark side of the moon, detects that it has serious damage and is dangerously off course. Contemplating their non-interference directive, do they allow the ship to continue on its course or take steps to correct the problem? Who is really on this ship and how will the actions of this Vulcan crew affect the future the Star Trek timeline? 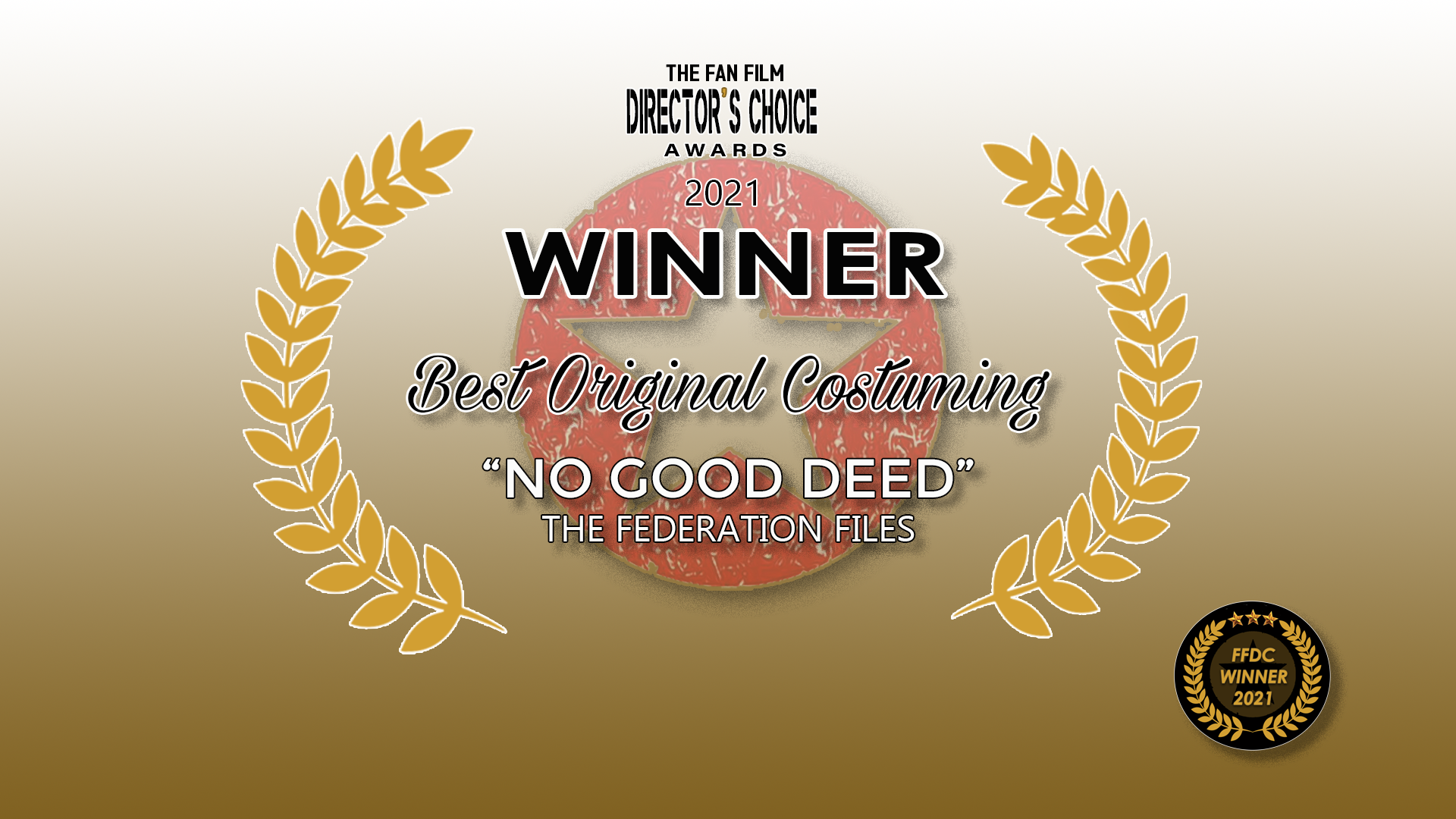 Harry Mudd is back and he’s creating a real mess for everyone. While Captain Bishop is on a much deserved vacation, command of the USS Valiant falls upon his first officer, Commander Parsons. Parsons pays a visit to K-7 space station to investigate why thousands Cattulan refugees are mysteriously appearing on planets all across the quadrant. And who does Parsons bump into? You guessed it! Harry Mudd! Leave it up to Mudd to be right in the middle of the chaos! 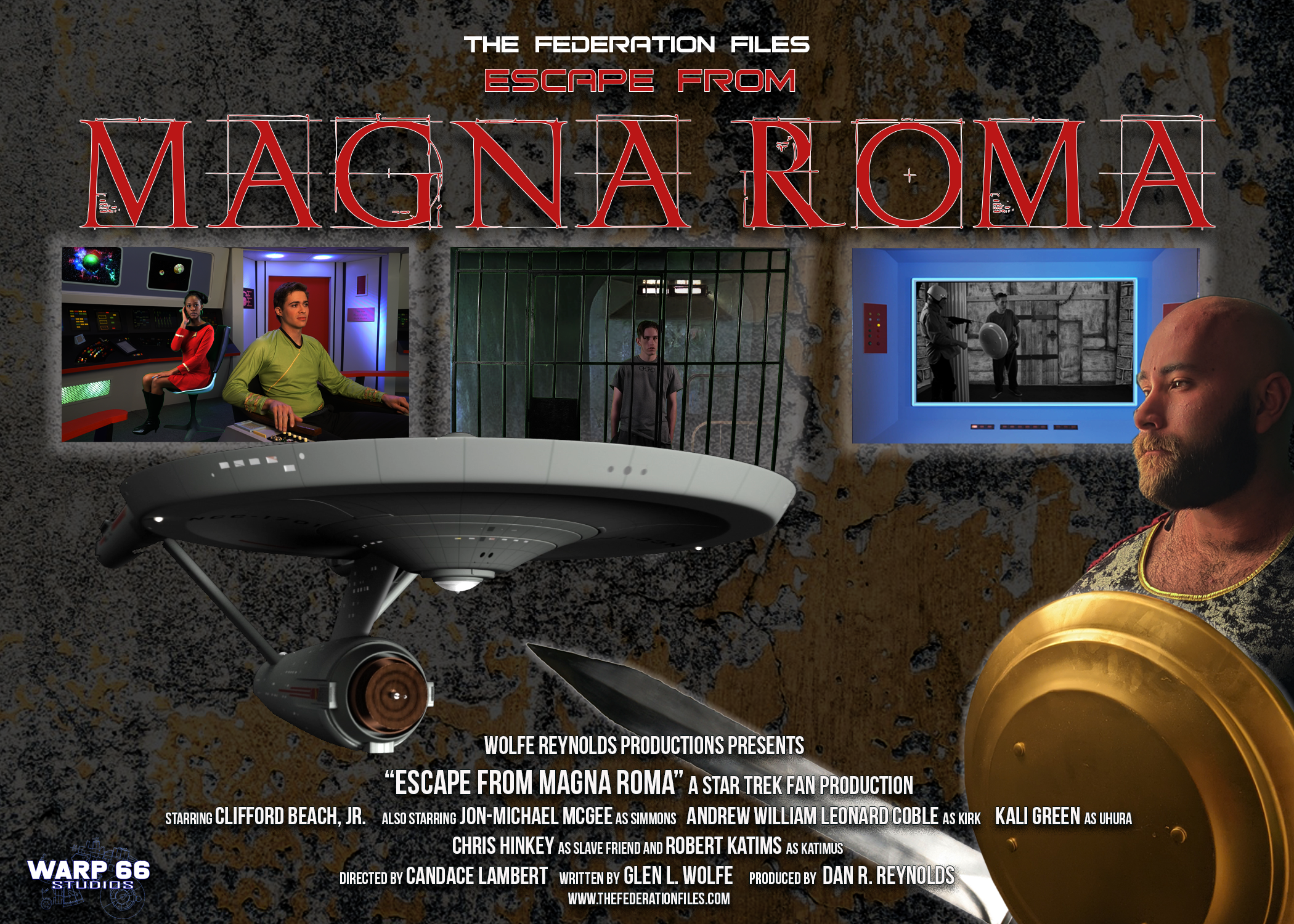 Six years ago, the SS Beagle was lost with all hands, now the USS Enterprise has located it. Find out in this vignette, which takes place immediately after Bread and Circuses, if any one was able to Escape from Magna Roma.

Original Audio by Peter Pan Records. Go Animate! by Glen L. Wolfe
Star Trek and all related marks, logos and characters are solely owned by CBS Studios Inc. The videos, the promotion thereof, and/or any other materials created by Star Trek Fan Films are not endorsed by, sponsored by, nor affiliated with CBS, Paramount Pictures, or any other Star Trek.


“A Mirror for Futility”

The U.S.S. Enterprise encounters two war vessels that have been a war so long no one on either side lives and only the two vessels shoot at each other in a never ending battle run by their on board computers. Captain James Kirk and his crew trick the ships into leaving Federation space.

The Enterprise encounters a giant space entity known as the Gola that warps time. When Spock discovers that it is an infant the crew takes it home. They also run into two fellow humans from Earth who left the planet in the age of the barbarians and still live as such.

The Crew of the Enterprise has to uncover a string of thefts of Federation robots.  When it is revealed that it is the Romulans the Federation fears the worst and have to stop the war before it begins.

Captain’s log… 5468.2: A request has been received at Starfleet Headquarters from a recently contacted civilization – the system of Marpaplu – for accreditation as an associate member of the United Federation of Planets. The Enterprise has been ordered to Marpaplu to consider final processing of the Marpapluan application.

Captain’s log, stardate 5466.9. The Enterprise is in orbit around the outpost colony world of Ribol II, on orders from the Federation Agricultural Division, to try and find a solution to the destructive plague of dranzers, which wipes out seventy to ninety percent of the grain crop every sixth year. A landing party of Doctor McCoy, First Officer Spock, and myself has beamed down to the Ribolian surface to survey the problem first hand. Mister Newt Henderson, of the Ribolian Settlers League, has taken us in hand.

Captain’s log, stardate 5442.8. First officer Spock and I have been directed to act as Federation representatives to discuss conflicting claims to the metal-rich uninhabited world about Star WWB7. We are proceeding on course to the neutral world of Pomplance to meet with Ambassador Koft of the Klingon Empire and Envoy Bendes of the Romulan Sphere.


“Crier in the Emptiness”

Captain’s log, stardate 5444.9. The Enterprise is on a charting run through the partially explored Moran Sector. Since this region seems relatively devoid of suns and planets, we expect to be finished here in a few days. Kirk out.

Captain’s log, stardate 5440. The USS Enterprise has been ordered to transport the pet waul of the Moauvian ambassador from Centaurus Base to his home world of Moauv. We are proceeding on course… as rapidly as possible.

Captain’s log, stardate 96.024. It’s been an exhausting, but rewarding, time for the starship Enterprise. Meeting intelligent dinosaurs, fighting a super-criminal, and defeating the Romulans has thrilled each and every one of us, but it has tired us out, too. So it is now a pleasure to comply with Starfleet Command’s order to bring a new member of the Federation back to their home in the Garr system, while giving them a tour of our mighty ship. The ambassadors from the planet Garrus seem harmless enough, their child-like size and innocent faces have charmed almost everyone, but sometimes they seem just a little too harmless.

“The Man Who Trained Meteors”